Odysseus is one of my favorite heroes in Greek Mythology.  I love that he is celebrated for his intelligence, creativity, and ingenuity.  Any hardcore nerd can appreciate this celebration of knowledge, but Odysseus’s greatest attribute can sometimes give out on him.  In translations of Homer’s original texts Odysseus is often given the epithet “wily” or “crafty” and he totally fucking is.  Odysseus is the original frat boy with twelve guys hanging around, getting into awesome trouble, being pretty clever about cleaning up your mess, and becoming king.  Not that frat boys become kings, but they have a head start in the business world sometimes.  Let’s start from the beginning, shall we?

Did somebody say adventure? Because I’m all over that shit. Fuck this mundane king stuff.

Of the cunning hero,

The wanderer, blown off course time and again

After he plundered Troy’s sacred heights.”

Depending on the translation the Odyssey can be a string of unbearably long and arduous descriptions to etymology or it can skip to the juicy parts and be really hilarious.  Odysseus is a pretty cool guy (albeit flawed, because what hero isn’t?) and the book starts with some commotion going on up top in Mount Olympus where Athena is nudging Zeus to get his shit together to help Odysseus out.  The next thing we know we’re seeing Telemachus and Penelope being hounded by a bunch of trashy dudes that are hanging out at their house waiting for Penelope to give up the “grieving widow” bullshit and marry a new guy.  Telemachus goes to visit Menelaus and Helen, who suddenly made up after the destruction of an entire city and a war that had waged for ten damn years, and everybody is exceedingly, condescendingly happy.  Telemachus just wants some relief from the squatters and some advice and the whole time Helen degrades herself as a “bitch” and a traitor, who is so happy that her husband graciously took her back she could weave a damn banner with his face on it the size of Sparta.  This was a very tiring part of the book, because…well…Helen’s life sucks balls.  And I sympathize for her, but we go on.

Skip to the scene where Calypso is kicking Odysseus off of her island against her will.  Calypso gets bothered by Hermes who tells her to break it off, because Odysseus needs to start getting his ass home and being a damn king by the order of Athena and Zeus.  The best line in the book is delivered by Calypso when Hermes is like “just let the poor dude go”, but Calypso kind of likes her boy-toy.  When pressed by Hermes, Calypso is reluctant calling the gods the “most jealous bastards in the universe” and breaks out the double standard argument before she relents.  The most boss line in any Greek epic was delivered by a goddess who understood double standards even in Ancient Greek times.  Awesome.  But, even Calypso doesn’t want to deal with the shitstorn that Zeus and Athena can rain down on her if she doesn’t tell Ody to beat it. 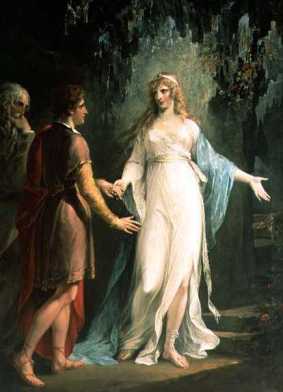 “I’d really like to have my cake and eat it, too, you sons of bitches. But you know what? I don’t feel like dealing with his shit or yours. Ody was good, but I can find better. Caly OUT.” ~ Calypso

Odysseus gets the boot and then, after a billion pages of description and travel, shit gets heavy.  We start to learn about all of the insanity Odysseus encountered.  After the Trojan War wily ol’ Odysseus decided to piss Poseidon off.  Poseidon responded with a “get lost”, which he thoroughly enjoyed watching.  Every chapter of the book is filled with the battles that happened after the Trojan War all the while Penelope is being quite crafty.  She’s promised the suitors that she’ll give them whatever they want…but she just wants to finish her weaving for goodness sakes!  Let the widow weave!  (Sorry for the bad pun…it was supposed to grieve, but you know weave…bad.)    She’s like “listen, when I’m done with this project I’ll choose, but until then…just keep gorging or whatever, because my son’s too pussy to kick you all out for fear of being beat up.  It’s not his fault.  His father was too busy with war and stuff.”

“Weave me be, you squatter brutes!”

Okay so let’s get back to Odysseus and away from silliness.  So Odysseus has to deal with Scylla, the biggest and most badass sea monster in Ancient Greece and possibly the origins for the phrase “between a rock and a hard place” before it dissolved into something crude; Polyphemus (he’s kind of a one-eyed bully) and escaping clinging to the belly of sheep (which was an awesome escape); losing all of his crew; washing onto a foreign beach and being adored by women; the death of his beloved dog…which made me sob; and finally dealing with squatters, the fact that his son is a ninny, and taking back control of his kingdom.  In each instance Odysseus has to make a choice…and he has to think wisely…but in each situation he always fucks something up.  This, my friends, lends to the moral of the story, which I will get to later. After escaping a man-eating cyclops and making it out alive, what do you NOT do?  Proclaim to the blinded cyclops who you are, because it’s the awesome thing to do.  Make a mess and write your name ALL OVER the place. 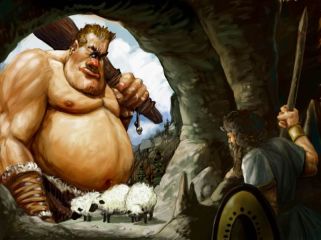 “Guys! Guys! Before we hightail it out of here on sheep I need some chalk or a damn sharpie, seriously guys, I’m OWNING this stunt.”

And then shit just gets worse.   Next comes the lotus eaters–a bunch of strung-out zombies that just hang out all day.  In the land of the Lotus Eaters everyone just kind of forgets about shit…they even forget to pose questions like ‘wasn’t I supposed to be somewhere?’, in fact they don’t even give a shit.  Then Odysseus kind of checked back into reality and they hightailed it out of there.  The choice: stay high and sedated and blissfully happy or get on with you life, face your challenges with dignity, and do your duty.  Odysseus was right.  Then there is Circe the really nice witch that turned into a sociopath.  You know those people that are just too nice and welcoming and let you eat everything of theirs and whatnot and then they just turn into soul-sucking people who turn you into swine with the flick of their wrist and proposition you for sex?  Well yeah, she’s one of those.  If she had turned out to be a cannibal she would have been the female version of Hannibal.  The choice: should I get it on with her or face being the keeper of my soul and penis for life?  Odysseus had a little help from Hermes, but he totally chose his bros over that witchy woman.

However, the trip to the underworld is my favorite part of the epic.  Odysseus faces the problem of having to delve into his past to move on with his life.  I love this entire scene–it really created a world of art in my head that I wish I could have put down on paper.  Odysseus saw his old friends, some ancestors, and all the while he was desperately searching for some wisdom from the past to move into the future.  That was a fabulous moment in the epic–dark, dreary, vampiric…I will not make fun of this part at all.  Even though Agamemnon shows up and is like “I WAS BETRAYED BY PEOPLE I THOUGHT LOVED MY ABUSE!  DON’T BE BETRAYED!”  Okay…nevermind, I had to.  Moving on to the sirens…

To the tune of Robin Thicke’s “All Tied Up”: “Sirens, I am all tied up on this boat…come save me…I feel lonely, I feel blue–even though you look like birds, you’ll doooo!!!”
PS: if you need help with knowing the song I referenced, just click the picture.

I still don’t understand this whole part…I mean, yes, I understand it.  I understand why Odysseus had his men tie him to the mast of the boat while they rowed past the sirens and the king is writhing about all tied up and wishing he could get some Robin Thicke sexy action on with those pretty little siren babes.  I guess the choice here is facing your demons head on and conquering them or just rowing about your life with wax stuffed into your ears…if you’re man enough to do it?  I don’t get it, but onward we go.  The next choice is also a bit common sense.  Take for instance the whole Scylla thing where we could get eaten by a sea monster or be thrown mercilessly against rocks by Charybdis, destroying his boat, and killing everyone.  You can maneuver around rocks, I’m sorry, but you can.  Deciding to go near Scylla was stupid–of COURSE it’s certain death.  It has a TON of heads, in fact enough to eat every crew member, except for Odysseus.  Bad choice.  And that’s how he got to Calypso’s sexy home.

Anyway, there’s a moral behind all of this and I don’t know if it’s evading your duties with excuses or…facing challenges, making a decisions (whether good or bad), and dealing with the repercussions without complaint.  I choose to believe the latter.  The story ends with Odysseus finally getting home, his faithful dog dies at his feet…poor Argo…, and his wife takes him back.  Athena pretty much intervenes at all points as much as she can.  Athena is strangely obsessed with Odysseus for no other reason than he’s pretty damn brave, intelligent, and he kind of fucks up now and then, but at least he owns his messes and moves on with his life.  At one point Athena takes the guise of a man and she and Odysseus totally bromance it out.

This depicts the secret handshake between Athena and Odysseus. Ancient Greek BFFs 4-Evs.

So that’s the end for the epic of Odysseus.  Comments welcome.  Behave yourselves and be kind to one another, please.  Also, I will leave you with a final photo of my favorite detective(s). 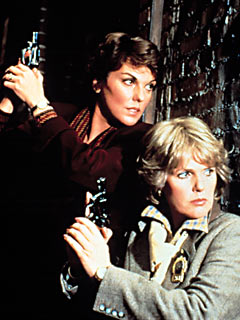 Sonny: “Sister…that ain’t us.”
Rico: “CROCKETT! When did I get turned into Tyne Daly?! I HATE BEIN’ TURNED INTO TYNE DALY!”
Sonny: “Oh brother…here we go.”